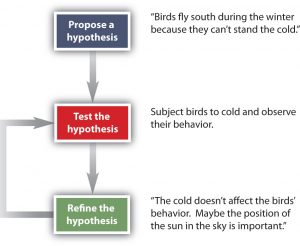 Not all scientific investigations are simple enough to be separated into these discrete steps. But these steps represent the general method by which scientists learn about our natural universe. You can use the scientific method to answer your own questions and better understand the world around you!

If a hypothesis if found to accurately explain a large body of experimental data after repeated testing, then it can reach the status of a theory. Outside of scientific discussion, the word theory may be used in place of hypothesis, but it is important to recognize that a scientific theory is much, much stronger than a hypothesis. Scientific theories are well-substantiated, comprehensive, testable explanations of particular aspects of nature. They are backed up by large sets of data and repeated, rigorous testing. One example is the theory of gravity – we know from generations upon generations of experience that when we drop a ball, it will fall towards Earth, not upward into space. Scientific theories represent the highest level of scientific understanding, yet are not permanent; they can be modified if new data become available.