Fats and oils can participate in a variety of chemical reactions—triglycerides can be hydrolyzed in the presence of an acid, a base, or specific enzymes known as lipases. The hydrolysis of fats and oils in the presence of a base is used to make soap and is called saponification. Today most soaps are prepared through the hydrolysis of triglycerides (often from tallow, coconut oil, or both) using water under high pressure and high temperatures (200°C). Sodium carbonate or sodium hydroxide is then used to convert the fatty acids to their sodium salts (soap molecules):

The production of soap is one of the oldest chemical reactions practiced by humans. Both the Phoenicians (600 BCE) and the Romans made soap from animal fat and wood ash. Even so, the widespread production of soap did not begin until the 1700s. Soap was traditionally made by treating molten lard or tallow with a slight excess of alkali in large open vats. The mixture was heated, and steam was bubbled through it. After saponification was completed, the soap was precipitated from the mixture by the addition of sodium chloride (NaCl), removed by filtration, and washed several times with water. It was then dissolved in water and re-precipitated by the addition of more NaCl. The glycerol produced in the reaction was also recovered from the water used to wash the soap.

Pumice or sand is added to produce scouring soap, while ingredients such as perfumes or dyes are added to produce fragrant, colored soaps. Blowing air through molten soap produces a floating soap. Soft soaps, made with potassium salts, are more expensive but produce a finer lather and are more soluble. They are used in liquid soaps, shampoos, and shaving creams.

The Cleaning Mechanism of Soap

Dirt and grime usually adhere to skin, clothing, and other surfaces by combining with body oils, cooking fats, lubricating greases, and similar substances that act like glues. Because these non-polar substances do not mix with water, washing with water alone does little to remove them. Soap removes them, however, because soap molecules have a dual nature. One end, called the head, carries a polar ionic charge and therefore dissolves in water; the other end, the tail, has a non-polar hydrocarbon structure and dissolves in oils. The hydrocarbon tails dissolve in the oil; the ionic heads remain in the aqueous phase, and the soap breaks the oil into tiny soap-enclosed droplets called micelles, which disperse throughout the solution. The droplets repel each other because of their charged surfaces and do not stick to each other. With the oil no longer “gluing” the dirt to the soiled surface (skin, cloth, dish), the soap-enclosed dirt can easily be rinsed away. 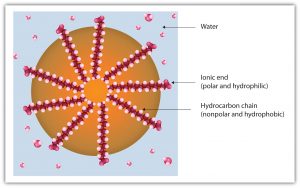