Fats and oils are the most abundant lipids in nature. They provide energy for living organisms, insulate body organs, and transport fat-soluble vitamins through the blood.

Structures of Fats and Oils

Fats and oils are called triglycerides (or triacylcylgerols) because they are composed of three fatty acid units joined to glycerol:

If all three OH groups on the glycerol molecule are replaced with the same fatty acid, the resulting ester is called a simple triglyceride. Although simple triglycerides have been synthesized in the laboratory, they rarely occur in nature. Instead, a typical triglyceride obtained from naturally occurring fats and oils contains two or three different fatty acid components and is thus termed a mixed triglyceride.

A triglyceride is called a fat if it is a solid at 25°C; it is called an oil if it is a liquid at that temperature. These differences in melting points reflect differences in the degree of unsaturation and number of carbon atoms in the constituent fatty acids. Triglycerides obtained from animal sources are usually solids, like beef fat (tallow), for example. Triglycerides of plant origin are generally liquid oils, such as olive oil or flaxseed oil. Therefore, we commonly speak of animal fats and vegetable oils.

No single formula can be written to represent the naturally occurring fats and oils because they are highly complex mixtures of triglycerides in which many different fatty acids are represented. The table below titled “Average Fatty Acid Composition of Some Common Fats and Oils (%)” shows the fatty acid compositions of some common fats and oils. The composition of any given fat or oil can vary depending on the plant or animal species it comes from as well as on dietetic and climatic factors. To cite just one example, lard from corn-fed hogs is more highly saturated than lard from peanut-fed hogs. Palmitic acid is the most abundant of the saturated fatty acids, while oleic acid is the most abundant unsaturated fatty acid.

Average Fatty Acid Composition of Some Common Fats and Oils (%)*

Fats and Oils and Our Health

Since 1992, the US Department of Agriculture has been promoting a food pyramid that gives a simple, visual picture of how much of what kind of foods make up a good, balanced diet. It recommends eating as few fats as possible. Although nutritionists recognize that some fat is necessary (and largely unavoidable, even by strict vegetarians), they emphasize that a large proportion of any fat, saturated or unsaturated, in the diet is unhealthy. Even so, a difference as simple as the difference between a single and double carbon–carbon bond can have a significant impact on health.

Physical Properties of Fats and Oils

Contrary to what you might expect, pure fats and oils are colorless, odorless, and tasteless. The characteristic colors, odors, and flavors that we associate with some of them are imparted by foreign substances that are lipid soluble and have been absorbed by these lipids. For example, the yellow color of butter is due to the presence of the pigment carotene; the taste of butter comes from two compounds—diacetyl and 3-hydroxy-2-butanone—produced by bacteria in the ripening cream from which the butter is made.

Fats and oils are lighter than water, having densities of about 0.8 g/cm3. They are poor conductors of heat and electricity and therefore serve as excellent insulators for the body, slowing the loss of heat through the skin. 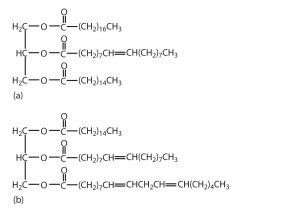