Although sweetness is commonly associated with mono- and disaccharides, it is not a property found only in sugars. Several other kinds of compounds have been synthesized that are far superior as sweetening agents. These so-called high-intensity or artificial sweeteners are useful for people with diabetes or other medical conditions that require them to control their carbohydrate intake. The synthetic compounds are noncaloric or used in such small quantities that they do not add significantly to the caloric value of food.

The first artificial sweetener—saccharin—was discovered by accident in 1879. It is 300 times sweeter than sucrose, but it passes through the body unchanged and thus adds no calories to the diet. After its discovery, saccharin was used until it was banned in the early 1900s. However, during the sugar-short years of World War I, the ban was lifted and was not reinstated at the war’s end. One drawback to the use of saccharin is its bitter, metallic aftertaste. The initial solution to this problem was to combine saccharin with cyclamate, a second artificial sweetener discovered in 1937.

In the 1960s and 1970s, several clinical tests with laboratory animals implicated both cyclamate and saccharin as carcinogenic (cancer-causing) substances. The results from the cyclamate tests were completed first, and cyclamate was banned in the United States in 1969. Then a major study was released in Canada in 1977 indicating that saccharin increased the incidence of bladder cancer in rats. The US Food and Drug Administration (FDA) proposed a ban on saccharin that raised immediate public opposition because saccharin was the only artificial sweetener still available. In response, Congress passed the Saccharin Study and Labeling Act in 1977, permitting the use of saccharin as long as any product containing it was labeled with a consumer warning regarding the possible elevation of the risk of bladder cancer. Today this warning is no longer required; moreover, the FDA is currently reviewing the ban on cyclamate, as 75 additional studies and years of usage in other countries, such as Canada, have failed to show that it has any carcinogenic effect. 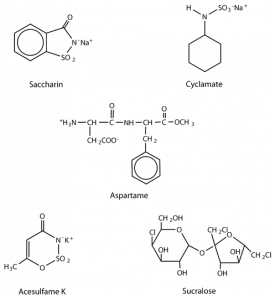 A third artificial sweetener, aspartame, was discovered in 1965. This white crystalline compound is about 180 times sweeter than sucrose and has no aftertaste. It was approved for use in 1981 and is used to sweeten a wide variety of foods because it blends well with other food flavors. Aspartame is not used in baked goods, however, because it is not heat stable.

In the body (or when heated), aspartame is initially hydrolyzed to three molecules: the amino acids aspartic acid and phenylalanine and an alcohol methanol. Repeated controversy regarding the safety of aspartame arises partly from the fact that the body metabolizes the released methanol to formaldehyde. It should be noted, though, that a glass of tomato juice has six times as much methanol as a similar amount of a diet soda containing aspartame. The only documented risk connected to aspartame use is for individuals with the genetic disease phenylketonuria (PKU); these individuals lack the enzyme needed to metabolize the phenylalanine released when aspartame is broken down by the body. Because of the danger to people with PKU, all products containing aspartame must carry a warning label.

Acesulfame K, discovered just two years after aspartame (1967), was approved for use in the United States in 1988. It is 200 times sweeter than sugar and, unlike aspartame, is heat stable. It has no lingering aftertaste.

One of the newest artificial sweeteners to gain FDA approval (April 1998) for use in the United States is sucralose, a white crystalline solid approximately 600 times sweeter than sucrose. Sucralose is synthesized from sucrose and has three chlorine atoms substituted for three OH groups. It is noncaloric because it passes through the body unchanged. It can be used in baking because it is heat stable.

All of the extensive clinical studies completed to date have indicated that these artificial sweeteners approved for use in the United States are safe for consumption by healthy individuals in moderate amounts.