This section of Ch. 3 will cover the following topics:

There are two ways to be a more correct writer:

If you read lots of books as a child and continued to read over the years, chances are your writing is already correct.  Why?  Because your brain absorbed the structures and systems we call “standard English usage” as you read.  You may not be able to recite the rules, but you use them correctly when you write.

If you aren’t much of a reader, you probably also struggle with writing to some extent.  But it is never too late!  Reading as an adult will help you write more correctly.  In the meantime, you can learn to avoid common mistakes by studying grammar.

Writers who want to write more correctly need to study grammar so they can consciously make correct choices.  Does it take work?  Yes.  But success is possible and, like every challenge in life, this one won’t get better until you deal with it.  The information in this chapter will get you closer to the kind of writing you want to be able to do.

“Parts of speech” is the system we use to explain how to build sentences–which word goes where, why, and in what form.

Even if you struggle with writing, your brain already has a pretty good grasp of how this system works.  For example, you know there is something wrong with this sentence:

I love dog my.

If I asked you to explain the problem, I doubt you would say, “The pronoun ‘my’ is being used as an adjective here, to show who owns the dog, and in English, adjectives usually come before the noun they modify.”  But you’ve heard enough correct examples that your brain automatically sees the problem.  The sentence should be:  I love my dog.

Can you spot the more subtle errors in the following sentences?

The label “part of speech” refers to what job a word is doing in a sentence.  There are eight parts of speech in English.  In other words, there are eight possible jobs.  Here is a list, with brief job descriptions:

In Ch. 3, we will study these eight parts of speech, one at a time and in depth.

This PowerPoint presentation is a visual review of the parts of speech. Click on the image below to open it and work through the slides. 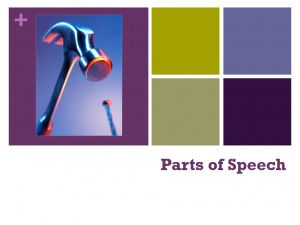 What Is a Noun?

The simplest words in English are ; they are easy to understand and found everywhere.  To understand how English is structured, start by understanding what nouns do and how to find them in sentences.

A noun is a word that names people, places, things, or ideas.

Remember that “part of speech” is what job a word is doing in a sentence.  “Naming” is a noun’s job.  All of the following words are nouns because they name someone or something:

Most nouns are things you can see (like a mouse or the sun), but nouns also name ideas  (like faith or democracy).

There are two types of nouns: proper and common.  Proper nouns name specific people, places, things, or ideas.  For example:

Proper nouns can be more than one word, but they still name one thing. For example:

The following types of words are usually proper nouns:

Common nouns, like proper nouns, can be more than one word, but they still name one thing.  For example:

Nouns of more than one word are called compound nouns.  The two words together have a meaning that is different from the two separate words.  For example, a “state” is one thing, a “representative” is another thing, and a “state representative” has a third, slightly different meaning.  Sometimes compound nouns are written as one word (“greenhouse”) or hyphenated (“mother-in-law”).  Check a dictionary to be sure.

Sometimes words can be a proper noun in one sentence but a common noun in another.  For example:

Cartoon videos are an easy way to review the information you studied.  Click on the icon below to view a video about nouns:

Type up the following sentences.  Double space the text.

Identify which words in the above sentence are nouns by highlighting them in yellow.   Remember that a noun can be proper or common and also can sometimes be more than one word.

For example:  The fox jumped over the sleeping German Shepherd, then ran silently away.

The word “fox” is a common noun and one word.  “German Shepherd” is a proper noun made up of two words.

When you have finished this exercise, keep it handy; you will continue to work on these same sentences as you proceed through Ch. 3.

Knowing what to capitalize is not difficult: there are only a few rules.

Why are rules of capitalization in a chapter about nouns?  Because one of the main ways capital letters are used is to differentiate between proper and common nouns.

Besides proper nouns, there are just a few other capitalization rules:

That’s it.  The challenge is not understanding when to capitalize.  It’s just remembering to do it.

Type up the following sentences, correcting any capitalization errors.

the system and structure of a language

the name of a person, place, thing, or idea

1, 2, 3 Write! by Gay Monteverde is licensed under a Creative Commons Attribution-NonCommercial-ShareAlike 4.0 International License, except where otherwise noted.