For my mom Kären, A breast cancer warrior and my best example of a strong woman.

“Never be ashamed of a scar. It simply means you were stronger that whatever tried to hurt you” ~Unknown

Anatomical Structure of the Female Breast

The breasts are located far from the other female reproductive organs so they are considered “accessory organs” of the female reproductive system. The function of the breasts is to supply milk to an infant in a process called lactation. The external features of the breast include a nipple surrounded by a pigmented areola (Figure 9), whose coloration may deepen during pregnancy. The areola is typically circular and can vary in size from 25 to 100 mm in diameter. The areolar region is characterized by small, raised areolar glands that secrete lubricating fluid during lactation to protect the nipple from chafing. When a baby nurses, or draws milk from the breast, the entire areolar region is taken into the mouth.

Breast milk is produced by the mammary glands, which are modified sweat glands. The milk itself exits the breast through the nipple via 15 to 20 lactiferous ducts that open on the surface of the nipple. These lactiferous ducts each extend to a lobe within the breast itself that contains groups of milk-secreting cells in clusters called alveoli (see Figure 9). The clusters can change in size depending on the amount of milk in the alveoli. The alveolar lobes themselves are surrounded by fat tissue, which determines the size of the breast; breast size differs between individuals and does not affect the amount of milk produced. Supporting the breasts are multiple bands of connective tissue called suspensory ligaments that connect the breast tissue to the dermis of the overlying skin.

Physiological Function of the Female Breast

During the normal hormonal fluctuations in the menstrual cycle, breast tissue responds to changing levels of estrogen and progesterone, which can lead to swelling and breast tenderness in some individuals. If pregnancy occurs, the increase in hormones leads to further development of the mammary tissue and enlargement of the breasts.

Lactation is the process by which milk is synthesized and secreted from the mammary glands of the postpartum female breast in response to an infant sucking at the nipple. Breast milk provides ideal nutrition and passive immunity for the infant, encourages mild uterine contractions to return the uterus to its pre-pregnancy size (i.e., involution), and induces a substantial metabolic increase in the mother, consuming the fat reserves stored during pregnancy.

Structure of the Lactating Breast

The non-pregnant and non-lactating female breast is composed primarily of adipose and collagenous tissue, with mammary glands making up a very minor proportion of breast volume. The mammary gland is composed of milk-transporting ducts, which expand and branch extensively during pregnancy in response to estrogen, growth hormone, cortisol, and prolactin. Moreover, in response to progesterone, clusters of breast alveoli bud from the ducts and expand outward toward the chest wall. Breast alveoli are balloon-like structures lined with milk-secreting cells, or lactocytes. Milk is secreted from the lactocytes, fills the alveoli, and is squeezed into the ducts. Clusters of alveoli that drain to a common duct are called lobules; the lactating female has 12–20 lobules organized radially around the nipple. Milk drains from lactiferous ducts into lactiferous sinuses that meet at 4 to 18 perforations in the nipple, called nipple pores. The small bumps of the areola (the darkened skin around the nipple) are called Montgomery glands. They secrete oil to cleanse the nipple opening and prevent chapping and cracking of the nipple during breastfeeding. 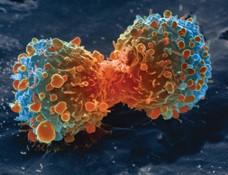 Cancer is the name given to a collection of related diseases. In all types of cancer, some of the body’s cells begin to divide without stopping and spread into surrounding tissues. Cancer can start almost anywhere in the human body. Normally, human cells grow and divide to form new cells as the body needs them. When cells grow old or become damaged, they die, and new cells take their place. When cancer develops, however, this orderly process breaks down. As cells become more and more abnormal, old or damaged cells survive when they should die, and new cells form when they are not needed. These extra cells can divide without stopping and may form growths called tumors.

Cancerous tumors are malignant, which means they can spread into, or invade, nearby tissues. In addition, as these tumors grow, some cancer cells can break off and travel to distant places in the body through the blood or the lymph system and form new tumors far from the original tumor.

Cancer is caused by changes to genes that control the way our cells function, especially how they grow and divide.

Genetic changes that cause cancer can be inherited from our parents. They can also arise during a person’s lifetime as a result of errors that occur as cells divide or because of damage to DNA caused by certain environmental exposures. Cancer-causing environmental exposures include substances, such as the chemicals in tobacco smoke or beauty products, and radiation, such as ultraviolet rays from the sun.

Cancers are staged 1-3/4, depending on the cancer and the severity.  When detected at stage 1, a person suffering from most types of cancer has about a 95% of surviving.  The odds go down as you get to stage 3 or 4 (some cancers only have 3 stages, others 4).  Doctors will often add an ‘A’ or ‘B’ to the staging as well, and this can relate to whether or not the cancer has invaded other tissues.

This list of common cancer types includes cancers that are diagnosed with the greatest frequency in the United States, excluding non-melanoma skin cancers:

Cancer incidence and mortality statistics reported by the American Cancer Society and other resources were used to create the list. To qualify as a common cancer for the list, the estimated annual incidence for 2016 had to be 40,000 cases or more.

The most common type of cancer on the list is breast cancer, with more than 249,000 new cases expected in the United States in 2016. The next most common cancers are lung cancer and prostate cancer.

The following table gives the estimated numbers of new cases and deaths for each common cancer type:

It is not possible to know exactly why one person develops cancer and another doesn’t. But research has shown that certain risk factors may increase a person’s chances of developing cancer. (There are also factors that are linked to a lower risk of cancer. These are called protective factors.)

Cancer risk factors include exposure to chemicals or other substances, as well as certain behaviors. They also include things people cannot control, like age and family history. A family history of certain cancers can be a sign of a possible inherited cancer syndrome.

The list below includes the most studied known or suspected risk factors for cancer:

Beauty Products and Cancer, Are You at Risk?

Although some of these risk factors can be avoided, others—such as growing older—cannot. Limiting your exposure to avoidable risk factors may lower your risk of developing certain cancers.

The number of new cancer cases can be reduced and many cancer deaths can be prevented. Research shows that screening for cervical and colorectal cancers as recommended helps prevent these diseases by finding precancerous lesions so they can be treated before they become cancerous. Screening for cervical, colorectal, and breast cancers also helps find these diseases at an early stage, when treatment works best.

A person’s cancer risk can be reduced with healthy choices like avoiding tobacco, limiting alcohol use, protecting your skin from the sun and avoiding indoor tanning, eating a diet rich in fruits and vegetables, keeping a healthy weight, and being physically active. 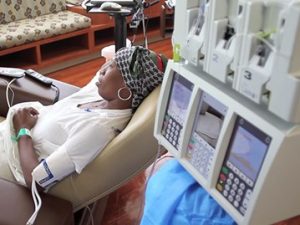 There are many types of cancer treatment. The types of treatment will depend on the type of cancer and how advanced it is. Some people with cancer will have only one treatment. But most people have a combination of treatments, such as surgery with chemotherapy and/or radiation therapy.

Research over many years has confirmed that cervical cancer is most often caused by a sexually transmitted infection with human papillomavirus (HPV). There are over 100 related viruses in the HPV family, and the characteristics of each strain determine the outcome of the infection. In all cases, the virus enters body cells and uses its own genetic material to take over the host cell’s metabolic machinery and produce more virus particles.

Risk factors for cervical cancer include having unprotected sex; having multiple sexual partners; a first sexual experience at a younger age, when the cells of the cervix are not fully mature; failure to receive the HPV vaccine; a compromised immune system; and smoking. The risk of developing cervical cancer is doubled with cigarette smoking.

The prevalence of cervical cancer in the United States is very low because of regular screening exams called pap smears. Pap smears sample cells of the cervix, allowing the detection of abnormal cells. If pre-cancerous cells are detected, there are several highly effective techniques that are currently in use to remove them before they pose a danger. However, women in developing countries often do not have access to regular pap smears. As a result, these women account for as many as 80 percent of the cases of cervical cancer worldwide.

In 2006, the first vaccine against the high-risk types of HPV was approved. There are now two HPV vaccines available: Gardasil® and Cervarix®. Whereas these vaccines were initially only targeted for women, because HPV is sexually transmitted, both men and women require vaccination for this approach to achieve its maximum efficacy. A recent study suggests that the HPV vaccine has cut the rates of HPV infection by the four targeted strains at least in half. Unfortunately, the high cost of manufacturing the vaccine is currently limiting access to many women worldwide.

Ovarian cancer affect the female ovaries. Unfortunately, this type of cancer often goes undetected until it has spread within the abdomen.  Ovarian cancer often has no symptoms in the early stages and later stages may have non-specific symptoms such as weight loss or loss of apatite.

Women's Health by Dawn Markell is licensed under a Creative Commons Attribution 4.0 International License, except where otherwise noted.