Exemplification uses one or more particular cases, or examples, to illustrate or explain a general point or an abstract concept. You have probably noticed, when on social media, watching television talk shows or listening to classroom discussions, that the most effective exchanges occur when participants support their points with specific examples. Sweeping generalizations and vague statements are not nearly as effective as specific observations, anecdotes, details and opinions. Many of the most effective essays use examples extensively. Exemplification is used in every kind of writing situation to explain and clarify, to add interest and to persuade.

It is one thing to say:

“The mayor is corrupt and should not be reelected”

and quite another to illustrate your point by saying:

“The mayor should not be reelected because he has fired two city workers who refused to contribute to his campaign fund, has put his family and friends on the city payroll and has used public employees to make improvements to his home.”

The difference? Proper and effective use of exemplification.

Here’s and example that how the primary concept is made more clear and more concrete by specific examples . 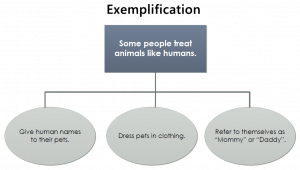 Whether we are evaluating a piece of writing or writing our own essays, exemplification can be a very useful tool in helping us better understand and communicate complicated and abstract concepts. As you have seen from the lecture, videos and reading, there are few ways to more vividly represent an idea in the minds of your readers than the proper and effective use of exemplification.

Writers use exemplification extensively in every kind of writing situation to explain and clarify, to add interest and to persuade. Anytime a writer uses examples to help support or claify a point, they are using exemplification. Sometimes examples are used to help the writer develop another kind of essay (definition, comparison/contrast, cause/effect, etc.) and other times exemplification becomes the primary pattern of development for the essay itself (as with the Brett Staples essay you are reading this week).

You might wonder how exemplification is different from illustration. To begin, exemplification focuses on giving examples while illustration is the broader process of making ideas clearer by using examples, diagrams or pictures. In this type of essay, examples act as supporting material to explain or clarify the generalization.

The 3 Rs of Exemplification Writing

The examples we select to illustrate a point do not need to be the only examples of the concept we are trying to define but they must be relevant, reliable and representative of that concept.

Composition in Cultural Contexts by Andy Gurevich is licensed under a Creative Commons Attribution 4.0 International License, except where otherwise noted.