Throughout our lives, we are bombarded with information from newspapers, television, radio, the Internet and personal experience. Somehow, we must make sense of the jumbled facts and figures that surround us. Whether we are trying to select a political candidate or party, a health care plan, a major in college, a new car or a new series to watch on Netflix, one way we have of understanding information like this is to put it side by side with other data and then compare and contrast the options.

We apply comparison/contrast every day to matters that directly affect us. When we make personal decisions, we consider alternatives, asking ourselves whether one option seems better than another. In the same way, comparative analysis helps us consider the similarities and differences between two (or more) things as a way to systematically evaluate them in relation to one another. Usually with the aim of determining which is the better option. 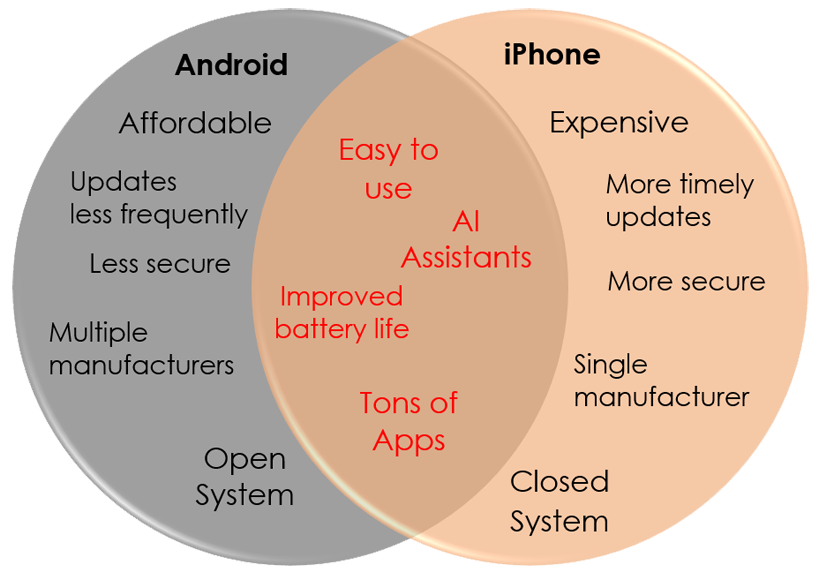 The Venn diagram above is a great example of how comparison/contrast can be used effectively to communicate a complicated idea (the differences and similarities of iPhones and Android phones) rather quickly and efficiently. The overlap contains the characteristics the two smartphones share and the corners reveal their differences. From this diagram, the student could write a paper (with relevant sources) that evaluates these two devices according to the stated attributes and makes a final decision on which smartphone is better suited for their own needs.

Establishing a Basis for Comparison

Before you can compare and/or contrast two things, you must be sure a basis for comparison exists—that the two things have enough in common to justify a comparison. For example, although apples and oranges are very different, they share several significant elements: they are both fruit, grown on trees and give juice. Without these shared elements, there would be no basis for analysis and nothing of importance to discuss.

Once a basis for comparison is established, a comparative analysis should lead you beyond the obvious. When two subjects are very similar, the contrasts may be more interesting to write about. And when two subjects are not very much alike, you may find the similarities are more worth considering. Please review the chapter on comparison/contrast for more on how this pattern of development can be used in college essay writing.

Planning to use Comparison/Contrast to make a point in your final essay?

Like every other type of essay in this class, a comparison/contrast essay has an introduction, several body paragraphs, and a conclusion. Within the body of your paper, however, you can use either of two basic comparison/contrast strategies subject by subject or point by point. 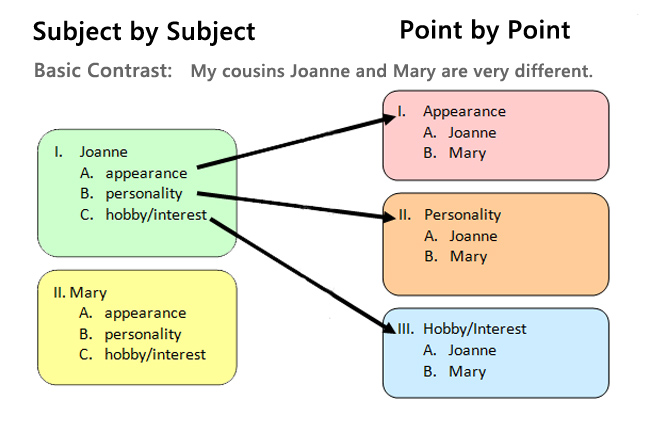 As you might expect, each organizational strategy has advantages and disadvantages. In general, you should use subject-by-subjectcomparison when your purpose is to emphasize overall similarities or differences, and you should use point-by-point comparison when your purpose is to emphasize individual points of similarity or difference. Consult your textbook for more information on how and when to use these various patterns in your comparison/contrast writing.

Comparison and contrast can be simple as illustrated by the Venn diagram of apples and oranges. But take a look at this one from Reddit examining the age old battle between PC and Mac. The contrasts of two computer operating systems brings up a labyrinth of issues involving global economics, cultural alignments and worldviews.

Composition in Cultural Contexts by Andy Gurevich is licensed under a Creative Commons Attribution 4.0 International License, except where otherwise noted.