This chapter includes answers to the exercises that have right or wrong answers.  Once you have completed an exercise, check your answers here. If you made a mistake, see if you can figure out why. If you can’t figure it out, ask the instructor or a tutor to explain. If you got the exercise correct, good job!

This section does not include answers to exercises that are based on your personal experience, like those in Ch. 1, because those answers will differ from student to student.  It also does not include exercises that are steps in a writing assignment, like those in Ch. 6, because your answers will differ from those of other students.

The nine misspelled words in the paragraphs about Alexie are as follows (the correct spelling is in parentheses):

The correct word is underlined.

The clichés that need replacing are “ax to grind,” “wit’s end,” “bottom line,” “make ends meet,” “my brain is fried,” “pulling an all-nighter,” and “tongue tied.”

The proper nouns in these sentences are as follows:

The common nouns in these sentences are as follows:

The correct pronouns are underlined.  The is identified in the parentheses that follows.

The pronoun errors are crossed out and any necessary changes are inserted in red.

The correct verb form is underlined.

In Ex. 1, you labeled the common and proper nouns and the pronouns.  Then you identified any adjectives that modified those nouns or pronouns and drew an arrow from the adjective to the word it modified.

In Ex. 2, you identified which words were verbs.  Then, you found any adverbs that modified verbs, adjectives or other adverbs and drew an arrow from the modifier to the word modified.

(I have labeled conjunctions and prepositions and enclosed prepositional phrases in parentheses,for your information; that was not required on the assignment.) 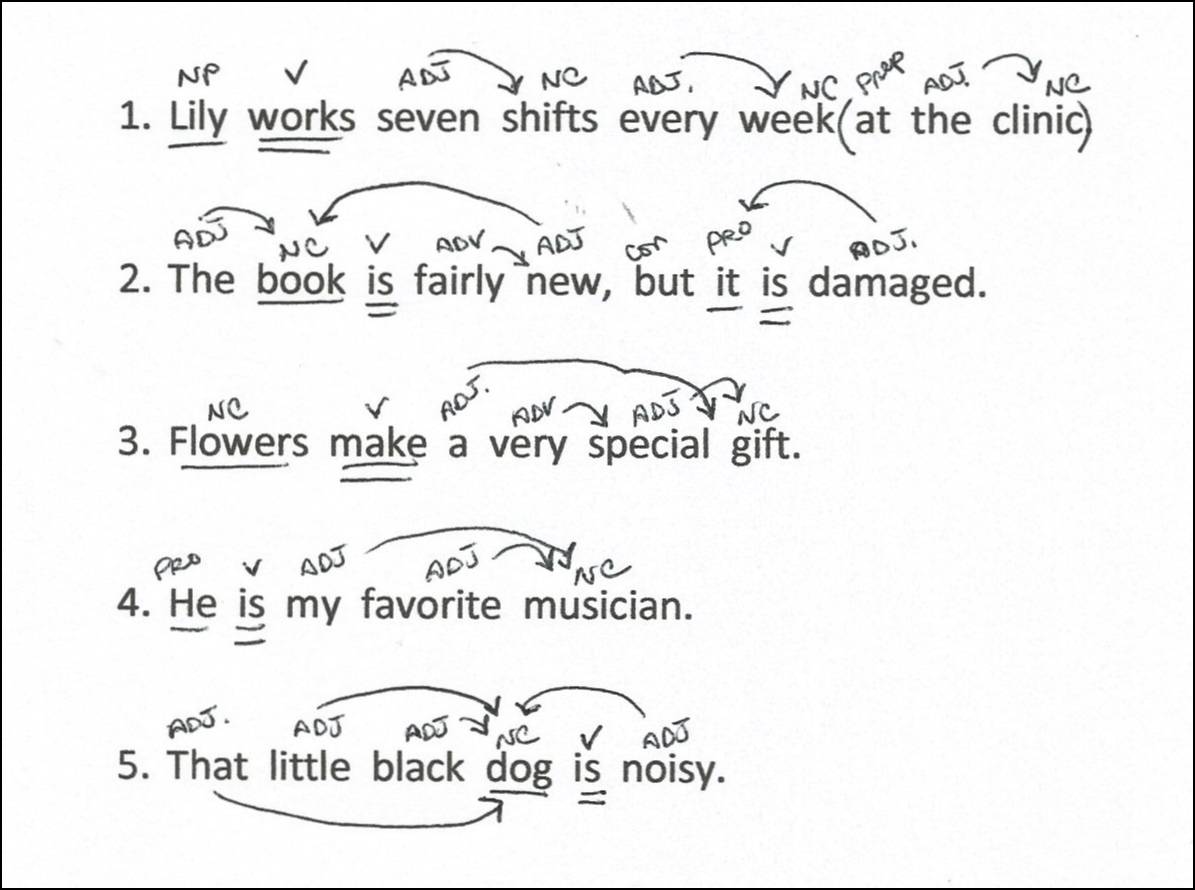 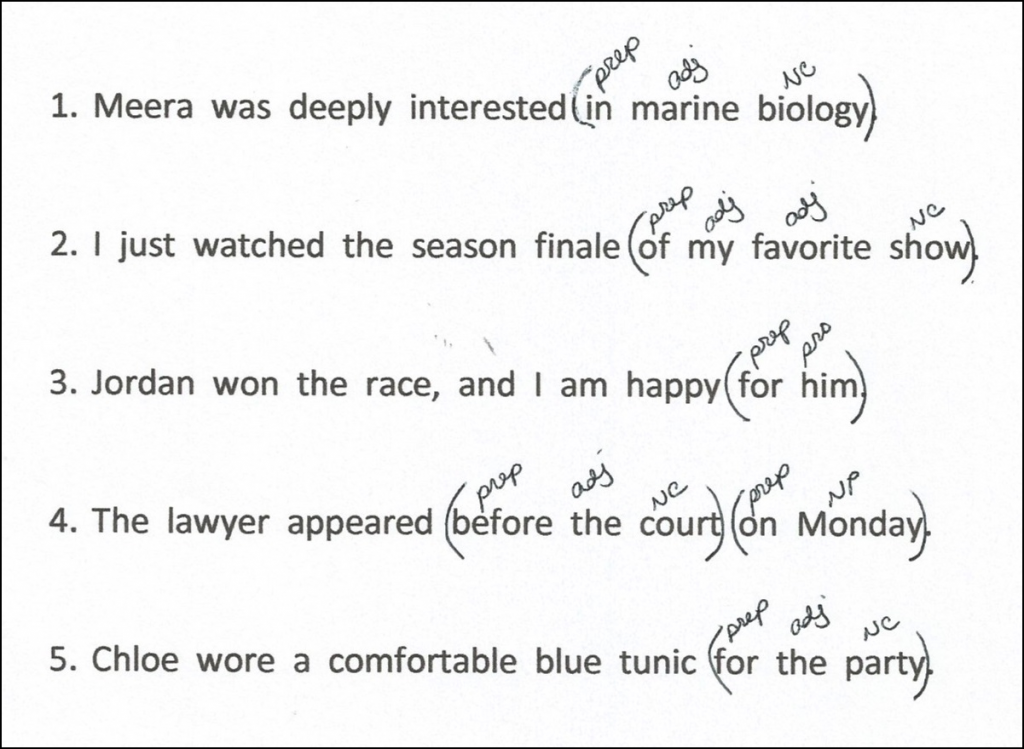 This exercise asked you to simply find and label any conjunctions. 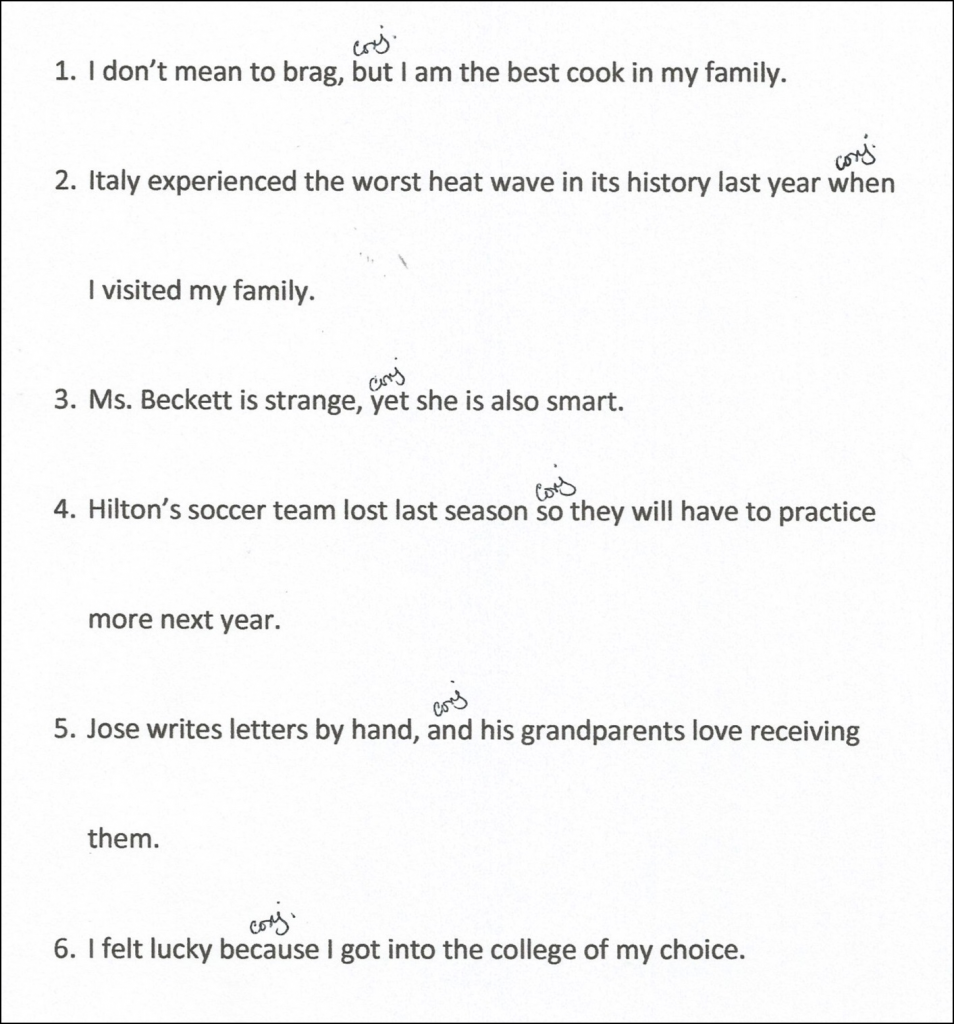 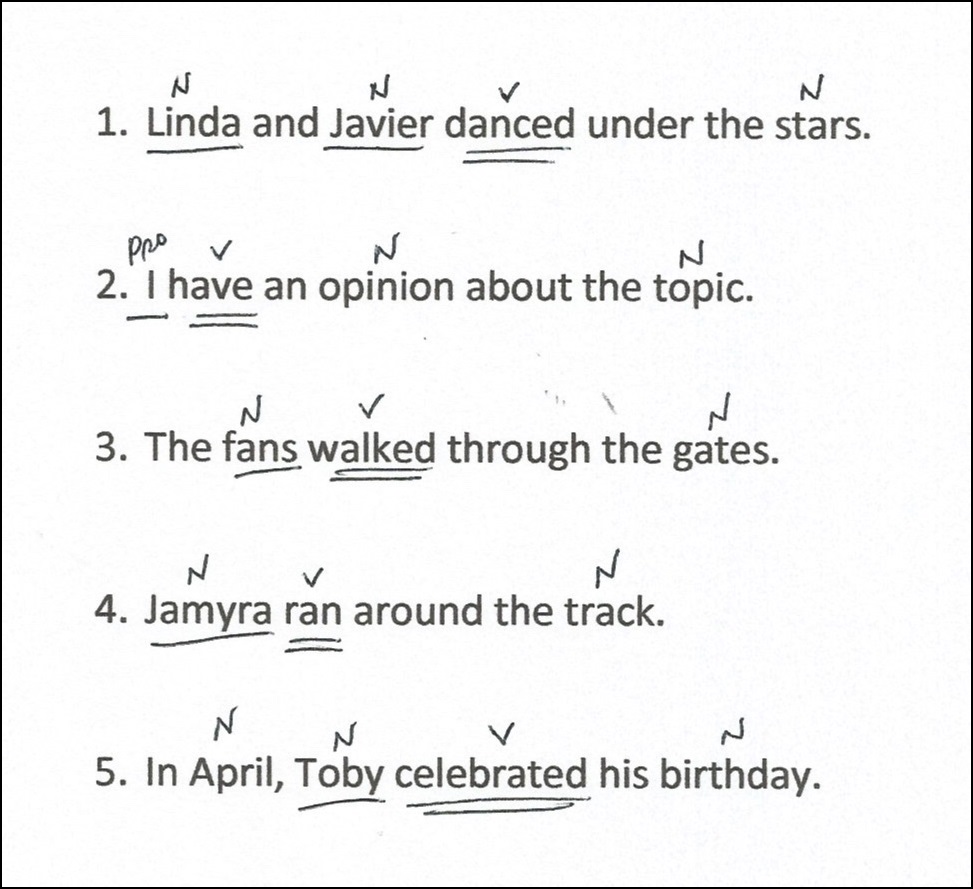 Complete sentences are marked.  Fragments have missing information explained.  Corrections will vary from student to student.

Corrections to subject-verb agreement errors are in red.

Misplaced modifiers have been corrected in red.

There are several ways to correct the dangling modifiers in these sentences.  The answers presented are one option.

There are several ways to correct the parallel structure in the following sentences.  These answers present one option.

End punctuation is added in red.

Commas and conjunctions have been added to these sentences.  Some words have been changed where necessary.

Commas have been added in red where necessary.  If a sentence was correct, it has been marked as such.

Commas have been added in red.

Commas have been added in red. At the end of each sentence, the number of the rule is listed.

Apostrophes have been added in red.

Quotation marks have been added in red.  Notice whether they appear before or after other punctuation.  Correct sentences are marked “Correct.”

The following are correctly italicized or enclosed in quotation marks.

Capital letters have been corrected in red.  Notice that some errors are missing capitals and other errors are capitals that should be lower case.

David Grann’s The Lost City of Z mimics the snake-like winding of the Amazon River. The three distinct stories that are introduced are like twists in the river. First, the author describes his own journey to the Amazon in the present day, which is contrasted by an account of Percy Fawcett’s voyage in 1925 and a depiction of James Lynch’s expedition in 1996. Where does the river lead these explorers? The answer is one that both the author and the reader are hungry to discover.

The first lines of the preface pull the reader in immediately because we know the author, David Grann, is lost in the Amazon. It is a compelling beginning not only because it’s thrilling but also because this is a true account of Grann’s experience. Grann has dropped the reader smack in the middle of his conflict by admitting the recklessness of his decision to come to this place.

The suspense is further perpetuated by his unnerving observation that he always considered himself a neutral witness, never getting personally involved in his stories, a notion that is swiftly contradicted in the opening pages, as the reader can clearly perceive that he is in a dire predicament–and frighteningly involved.

a word the pronoun refers to

Write On! by Gay Monteverde is licensed under a Creative Commons Attribution-NonCommercial-ShareAlike 4.0 International License, except where otherwise noted.